Sorry this post is a bit late, everyone. My weekend was crazy busy so I had no time to sit down and actually write this.

My most hated trope.

These are the most common tropes, especially in contemporary literature and movies, and they drive me nuts. But what are they, you might ask? I’ll tell you.

A Mary Sue (male version being Gary Stu) is a type of female character who is depicted as unrealistically lacking in flaws or weaknesses. They are also very shallow because they have no emotions and/or are super powerful but without a way of becoming like that. They are the woman every man wants and every woman strives to be. A Mary Sue is an idealized and seemingly perfect fictional character, often recognized as an author insert or wannabe. Mary Sues are often beautiful, brave, always win against evil, usually have some sort of tragic backstory, are kind yet somehow aloof, intelligent, liked by everyone (except her enemies, which is usually because they’re jealous), always accepted, have special powers, etc. In short, they’re the perfect stoic all-powerful being that are just awful to have to read in literature or watch on television. Why? BECAUSE THEY ARE SO BORING.

I mean really, how many of you fancy reading a book where the main character is perfect, never messes up, never comes into conflict, is just above everyone else, floating around in the skies somewhere… *rant echoes into the distance*

You get the picture, right?

Examples in literature include Elsie Dinsmore and various other characters in the Elsie Dinsmore Series by Martha Finley. (Don’t get me even started on those.) Or Beth March in Little Women. Dorothy Gale from Wizard of Oz. Mary Ingalls from the Little House on the Prairie series. Examples in film include Rey in Star Wars and many people have accused Captain Marvel as a Mary Sue as well though I haven’t seen that movie myself so I cannot say for sure. Almost all Disney Princesses.

Question is, how can we avoid this infamous trope?

Jokes aside, there is a way to avoid it.

If you have missed the previous posts in this series, here they are:

Writing Tropes Part 2: The Chosen One

Next topic will be damsel in distress!

This week’s review is actually of a work by my friend, Libby, who was the one who suggested I do the discussion of writing tropes!

A Bit About the Author:

stormstars- is an aspiring author and book nerd who never stops dreaming up new worlds, complex characters, and evil-yet-lovable villains. She enjoys writing fantasy with twisting, dark plots–that is, when she’s not procrastinating… 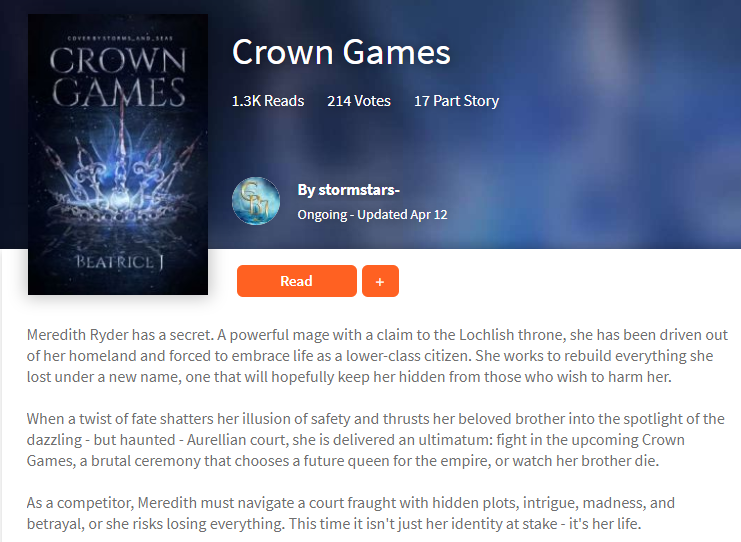 Honestly, while it is short and catchy and memorable, it is too similar to other titles when I think of it. Game of Thrones or Hunger Games, for instance, sound really similar. It gives off a GOT/Hunger Games/The Selection feel which isn’t too appealing. I wouldn’t have originally picked it up myself based on the aura the title gave–which is down-playing the story itself.

Gorgeous. The colors are very fitting and the font is readable. I love it.

Your blurb is good, overall, though I do have a few critiques. First of all, I don’t think the explanation behind Crown Games is necessary (though I appreciate seeing the title put in use already) since it’ll be explained in the story anyway. Better to leave the reader assuming that until later in this instance.

Third line, first paragraph, “lost” should be “has lost” to fit better with your verb tense.

My last critique is maybe to put the last line as its own paragraph so it has more of a banging suspense note. Makes it more dramatic, in my opinion.

I didn’t quite expect to enjoy this story as much as I did. Reading the first chapter, I was curious as to what happened next, but I was afraid that it fall into the typical cliché Wattpad story that has potential but falls really short of the mark.

Overall, your grammar is pretty good though there were a few typos here and there. Your opening and settings are very well done and I was able to get a good grasp of your world-building. (Something I personally struggle with a lot in my own fantasy writing haha.) Your characters were excellent! I loved getting to know them and I look forward to seeing more interactions with them. So far, your plot is slow into getting into the more action-y stuff (which I personally enjoy because I can get more out of your characters and world-building), but it’s a good pace. Your strong point is definitely your narrative. So many of your lines would make such epic quotes to hang on the wall. Keep it up!

I know Hannah’s review was already very indepth on this, so I’m just going to add to what she said because I agreed a lot with it.

Characters, as I stated above, are excellent. I just have a few issues about whatshisface, Fritz? Oh wait, Fitz. Or something like that. He seemed a bit immature to me. Or like when Meredith and Fitz were in that one place in the moonlight by the piano. That felt too rushed and didn’t make sense. Surely there’d be guards around. Just things like that made me wish that he was better worked on.

Another issue is chapter length. Please. This is Wattpad. PLEASE BREAK UP YOUR CHAPTERS INTO DIFFERENT PARTS. (Sorry about the yelling, by the way.) It’s just way to long for Wattpad chapter length and my page often froze up loading the rest of it. For a published book, the length is perfect, but since this is indeed *cough* Wattpad, please consider splitting it up into chapter parts so they’re not so long to read at once. I know you did it once, but I’d like to see it done with all of them.

My last thought of now is your narrative. It was beautiful with epic one-liners, but there were passages that just felt rough in comparison with the rest. Just try to smooth it all when editing and it’ll be perfect!

What the Reader Thought:

I really loved this story. (Again, congratulations for winning my contest!) It is very steampunk-y with a high fantasy twist that makes for a thrilling and dangerous ride. Besides that which I mentioned above that needs work, you have a great story going on and I’m excited to see where you take it in future. Keep it up!