We see them everywhere.

Hiding within the pages of books, leaping out of the television screen, hovering in writing discussions, lingering in the recesses of our minds. Used so often, they’ve become hated clichés in the writing communities–especially considering how so many are badly used.

Well, while many people disagree on this issue, I believe that these tropes can be a good thing–if properly executed. (Sadly, many are not.) And over the next few weeks, I’m going to talk about these tropes, what they are, and whether they should be used in writing or not.

For starters, let’s go with one highly popular in the fantasy, sci-fi, and historical fiction genres. The infamous “Wise Old Mentor.”

The Wise Old Mentor trope is basically an old man who gives advice/trains a younger character–usually the hero. The mentor is usually better skilled, more experienced, faster, etc. and are passing on their gifts to their student. They might be too old to continue serving in their role and are therefore passing it on to another youngster who seems up the task. (Think Yoda or Obi-Wan Kenobi from Star Wars.) Another example from classic literature is the Mentor of Telemachus in The Odyssey, who is actually Athena doing her best to bring Odysseus home.

Another popular Wise Old Mentor subtrope is a mysterious guy that suddenly appears, delivers a prophecy or a quest upon a hero who is the Chosen One. (Chosen One trope will be discussed later.) Think of Gandalf from The Lord of the Rings. He doesn’t train Frodo Baggins in the use of his magic granted to him by the Valar; he just pops in from time to time in the hobbits’ lives–sending Bilbo Baggins on a quest in The Hobbit with the dwarves who are trying to reclaim their old homeland–or sending Frodo and his friend Samwise Gamgee on a quest to bring the Ring to Rivendell and ultimately to Mordor to be destroyed. Granted, Gandalf does end up travelling with them for awhile, but he’s not constantly with the characters nor does he “train” them.

Having explained what the Wise Old Mentor trope is, the question remains whether it’s something to be used in writing today or not. Of course, many people still use it. (For instance, Dumbledore from the Harry Potter series–of which I have not read and don’t intend to.) And, many people misuse it, having an old random guy/woman just show up, dump some info on the reader and protagonist, and leave in a cloud of smoke and confusion.

So can it be used?

I would say so. I’ve used it–I use it–occasionally. It does have its place in literature, as long as it’s not overused and makes sense to the logical flow of the story. When I do use this trope, I try to make it so the wise-old-mentor has either met the character before (i.e. Rhiada in Princess of the Highlands Trilogy; though I’m still working on editing that one. ;)) or they have some tie or connection with the character (i.e. the old woman in Within the Forest) or lastly, they accompany the protagonist on their journey in some way or at least spend some time with them so they don’t just appear and disappear without a proper explanation. If you’re going to use this trope, it needs to be done right. I’ve seen so many young writers misuse this (myself included; I’m still learning after all haha) and it’s sad because it is something that can work in literature or on TV.

In conclusion, the Wise Old Mentor trope can be used–but it must be used rightly. I hope this article was helpful to you and please feel free to let me know your thoughts in the comments below. Next topic will be on “The Chosen One” trope.

Song of the week is, in honor of Endgame which just came out, The Real Hero. Such a sad soundtrack piece and it makes me want to cry every time I listen to it. T_T And the movie was really good–but I don’t want to to do a review of it yet lest it spoils it for other people who haven’t seen it. Go listen to it, folks! Or better yet, go watch the movie!

Review for this week is TURN by my friend, Hannah Ward. 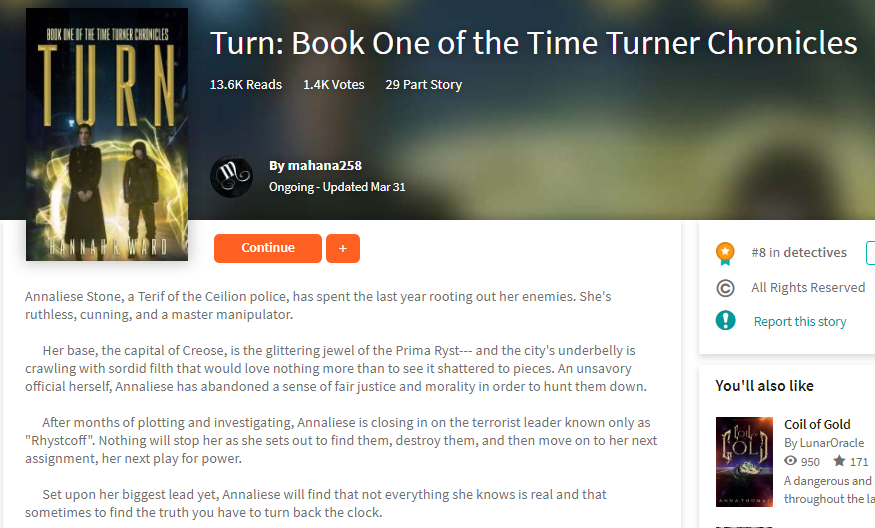 A Bit About the Author:

mahana258 is an Alaskan resident who enjoys writing fantasy and angsty love stories. She is also a talented graphics designer. She is a Wattpad ambassador and was shortlisted in the Wattys2018. She is the queen of TheFaeFolk, an account dedicated to promoting fantasy.

The title is very short and easy to remember. However, just glancing at it, while it does fill me with curiosity because it’s very… Different, shall we say? It’s a good title, but until the reader reads the book or the blurb, it literally makes no sense. (Though, to be honest, most books are  like that, I guess. XD)

A.K.A. I’m going to be more frank than my friend Frank.

(Yes, I have a very good friend by the name of Frank.)

Anyway, about that cover.

Honestly, it looks very amateurish as far as graphics go. I know your skill, Hannah. And this is not your best work at all. It’s probably my least favorite out of the covers for this book, no offense. Every other cover I liked, but not this one. For one thing, the subtitle is barely readable and so is the author’s name. The cover in general looks like some kind of wannabe-fantasy-that-is-actually-teen-fic. Not to mention that the guy with the hood is terribly photo-maniped. I’ve seen better work from you and this is a definite no-no from me.

Um, first thing’s first. Punctuation should ALWAYS be inside quotation marks. ALWAYS. There is maybe one exception, but it’s rare. Please fix this glaring mistake.

It’s a good blurb overall. Sets up a nice tension for the reader to get interested in your story and helps build a tiny taste of your world with the second paragraph.

Last thought on this topic for now. I feel like it would have a really good dramatic flare or whatever if you split the last line into two sentences/paragraphs so the last line is something like:

“After all, sometimes to find the truth you have to turn back the clock.”

Or something along those lines.

Excellent plot and story-line, I have to give you that. Some parts were a bit confusing to read at first, but once I actually turned my concentration cells on, it was not a problem. I like the drama build-up to the shock moment when Annaliese gets told what’s really going on (sorry I’m not going into details because of… Spoilers) and I like the tension that you have building up throughout your story. Kudos for that.

Character-wise, it’s well done for the most part. (More on that later.) Your characters add depth to your story and I was able to keep them apart for the most part. There are some instances where it was hard to keep who was who in my mind, but that might have been because I’m not reading this all at once and the pause during updates makes me forget sometimes. XD

Good job with grammar as well. Minus a few typos and mistakes here and there, it passes. 😉

(No worries, no machine guns.)

Annaliese. Not sure if this was your intention, but she often came across as some kind of Mary-Sue in the beginning which kinda ticked me off. It’s not “in-your-face” or anything, but if that’s not what your going for, I’d encourage you to work on this. I might not be the only one who thought this. If it is your intention, kick me out of the room for my ignorance or whatever.

World-building. This was good for the most part, but I would encourage you to do more. You have some great stuff going on and I’d like to see more of this world rather than what’s just focusing on Annaliese and her troubles. Not to distract from the story-line or anything, but to help with depth and things like that.

What the Reader Thought:

I like this story–I really do. And I think with a bit more work, it could really shine. I really enjoy reading this genre of steampunk/dieselpunk stuff and your book is really fun to read. The tension and action-scenes are spot-on and I hope it gets turned into a movie or TV show someday–it’d be epic to watch.

I wish you all the best with it and I can’t wait for the next update! ^.^

In closing, I hope you all are doing well! I have a couple of announcements to make, though, so stay tuned.

The first one is that there’s this new feature for Google Chrome, an extension, that you can add. Every time you click new tab, you get a heart. If you donate these hearts, it sends info to the ads displayed on each page to give more money to charities that help fund schools in Africa, provide clean drinking water in poor countries around the world, and other things! If you guys want to check it out, here’s the link! Tab For a Cause

Second announcement is that I created my own discord for my writing friends and readers alike! You don’t have to have had read anything of mine to join, but if you have, you can get to see sneak peaks, help me edit/write stuff, or just give advice. 🙂 Plus, you get to interact with a bunch of writers and graphic designers and get more ideas for your own writing–not to mention word sprints! If you’re interested, here’s the link to join: Gwyn’s Kingdom.

That’s all for now, folks!